The unavailability of 6 of the 7 nuclear power plants poses a challenge for the Belgian security of electricity supply. Doel 1, 2 & 4 have been out of service for some time and recently delays have been announced in the maintenance process of Tihange 2 & 3. For Tihange 1, maintenance is planned until mid-November. Combined with the decline in production capacity in the past decade and the uncertainties in the system, this situation may jeopardize the balance between supply and demand for electricity. This balance is necessary to guarantee an overall correct functioning of the electricity system.

Systematic reduction of Belgian production capacity in the past decade

Since 2011, the available production capacity of conventional power plants (nuclear, fossil fuels, hydropower and biomass) has been decreasing, while the peak demand for electricity shows a rise in the same period. Coal-fired power plants have been systematically shut down since 1998 to comply with the directive of the European Union to control and reduce the emissions from large incinerators, the so-called large combustion plants directive[1]. Some coal-fired power plants have been converted into biomass power plants or replaced by gas-fired power plants, and since 2002 the decline in production capacity has been partly absorbed by the installation of wind generators and solar parks. However, the electricity production from wind and solar is dependent on the weather and more uncertain compared to conventional power plants. The decrease in effectively available capacity therefore continues. 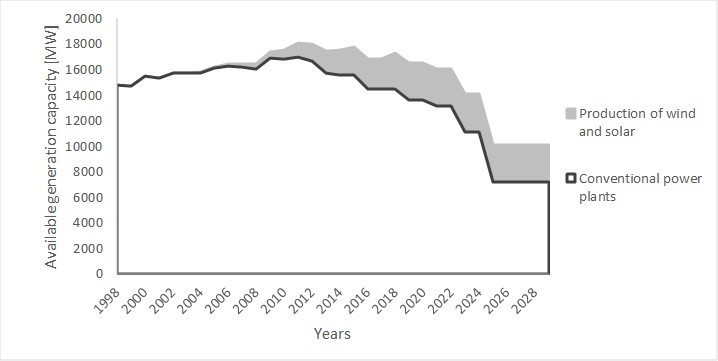 Due to the unavailability of five nuclear power plants, the system is currently in a state not foreseen in the grid operation. The network code with which the transmission system operator must comply requires the system to be able to withstand at any time the failure of one of its elements without jeopardizing its operation, the so-called N-1 criterion. At present the system is in a so-called N-5 state in which five grid elements, i.e. five nuclear power plants, are out of service. Other grid elements may also be out of service. Challenges in this situation are no surprise, otherwise the system would be strongly overdimensioned, which would lead to a high social cost. This does not necessarily mean that problems will really occur. For next winter, we count the following capacities that can be used to cover electricity consumption:

We leave out solar energy, considering the time of year.

This amounts to a total available capacity of approximately 19 065 MW (18 103 MW from mid-October to mid-November). The average peak demand in Belgium is 13 565 MW, while peak demand in an exceptional year (one year out of every twenty years) is 14 164 MW. [2] The list above assumes optimal conditions: the remaining production is fully available, the network in Belgium is completely intact and the entire import capacity can be used. In these optimal conditions, where all available network elements are fully operational, there is not necessarily a shortage of production capacity (whereby the import is seen as production capacity). Unexpected situations can however occur at any time.

In addition to the uncertainties in the electricity production of weather-dependent wind generators and solar parks, grid elements may fail or unexpected circumstances may occur. These failures or unexpected circumstances can lead to the maximum production capacity being unavailable. Generators can be out of service, as has recently been shown by an unexpected extension of the maintenance period of Tihange 2 & 3. Transmission lines or other grid elements can fail or can unexpectedly be out of service. Especially the connections with foreign countries are important here, since they directly determine how much electricity can be imported.

These uncertainties make it impossible to say exactly what will happen, only what the chances are of something happening. The capacity needed to meet the demand for electricity depends strongly on the requirements that have been set: should the supply security be guaranteed in all possible circumstances, in the most probable circumstances or in the ideal circumstances in which all available grid elements work as planned? This is the reason why different assumptions lead to different capacity needs. It has been legally established that the number of hours in which the expected demand exceeds the production capacity may not exceed three hours for an average year and 20 hours for an exceptional year. The government and transmission system operator are looking for additional solutions with minimal impact on the end-user to fulfill the criteria.

Limited availability of additional capacity in the short term

Restarting production units or installing emergency generators can increase the available capacity. The Federal Minister of Energy proposes to add 750 MW of additional capacity from the restart of the gas plant in Vilvoorde, productivity improvements of Engie gas plants, the deployment of diesel generators by Engie and other additional solutions such as the additional contracting of sheddable consumption.

The installation of additional production units in the short term is not feasible due to the time it takes to deliver the necessary permits and due to the construction time. Additional emergency generators based on fossil fuels can be installed in the short term. This, however, requires an agreement with the relevant system operator and a thorough technical installation to exclude safety risks. Their unitary capacity is limited and they have a significant local impact through emissions and noise.

Rolling blackouts as a last resort

Rolling blackouts are targeted shutdowns of certain parts of the electricity load. They are seen as the last resort to guarantee the balance between supply and demand for electricity and safeguard the global operation of the electricity system. They have been given the name "afschakelplan" or “load-shedding plan” in Belgium. Rolling blackouts have a fixed duration and they are announced in advance, in contrast to a blackout that occurs unexpectedly for an indefinite period. As a result, the social cost of rolling blackouts is lower than that of a blackout where the same load would be switched off. The zones that are disconnected and the shutdown procedure are described in the so-called disconnection plan. The disconnection plan divides Belgium into 8 zones that are alternately shut down when the balance between supply and demand for electricity cannot be guaranteed. This may happen when the demand for electricity peaks, typically between 5 pm and 8 pm.

More conscious and efficient use of electricity can prevent rolling blackouts

In many developing countries rolling blackouts happen regularly due to structural deficits in generation capacity. Belgium is not the first developed country threatened by rolling blackouts. Japan had to cope with the unexpected failure of a considerable part of the production capacity after the nuclear disaster in Fukushima. Electricity consumers in California were confronted with rolling blackouts at the turn of the century as a result of a failed market reform.

From these experiences we learn that even small consumers can have an important impact on the prevention of rolling blackouts by reducing their consumption during peak times. In California, communication in the media about the electricity crisis proved to be very effective in encouraging end-users to become more conscious of and more economical with electricity. Air conditioning in particular proved to be an important factor, which was also the case in Japan. On the other hand, consumers were encouraged to reduce their consumption by means of a higher electricity bill.

Belgian small consumers of electricity are protected in the short term from price fluctuations due to their futures contracts. A media campaign can encourage end-users to voluntarily reduce their electricity demand.

Due to the increasing use of electricity for transport and heating, a decrease in the demand for electricity is not to be expected in the coming years. That is why it is important to establish an unambiguous vision for the future energy system that allows to prevent problems with security of supply in the future.

An unambiguous vision can lead to consistent investment decisions in new production capacity. The study 'Energy Transition in Belgium: Choices and Costs', published by EnergyVille and Febeliec in 2017, has shown that investments in renewable energy as well as in biogas, power-to-gas, new gas-fired power plants and combined heat and power systems are required.[3] Studies by Elia and the Federal Planning Bureau come to the same conclusions. These investments can be encouraged, for example, by the government developing concessions with permits for new gas-fired power plants. Without this coordinated, thorough and rapid approach, the necessary investments will not take place and the current emergency measures will get a continuous character.

Smart energy meters in combination with alternative tariff methods can be used to utilize the flexibility of small consumers. Many applications have a flexible demand for electricity (free or paid), so that they can be activated at an appropriate time. For example, washing machines or dryers can be switched on outside of the peak times, or electric heating or charging electric cars can be controlled intelligently. The Linear project calculated for Flanders that we can potentially gain 267.9 MW of capacity by delaying the activation of residential applications.[4] Aggregators can collect flexible demand from end-users, offer the gathered capacity to the system operator and manage flexible capacity at the level of the end-user.

If the requirement to be virtually self-sufficient in our energy supply is loosened, it can be opted to rely (even) more on the neighboring countries and to invest in more interconnection capacity. For this too, a vigorous policy is needed in which an international perspective is indispensable. In a European energy system in which renewable energy sources form a substantial part of electricity generation, a national view on security of supply is becoming less and less realistic.