Our mobility is changing quickly. Electric bikes and steps are already widely present and hybrid and electric cars are rapidly gaining market share. This creates a strong interest from the car industry to integrate solar cells into the roof or other parts of a car. This not only ensures car electronics or air conditioning need less of the primary battery power, a highly efficient solar roof could also enable a substantially extended range. With the limited surface available on the car, however, the power conversion efficiency of the integrated solar panel must be maximally optimised. 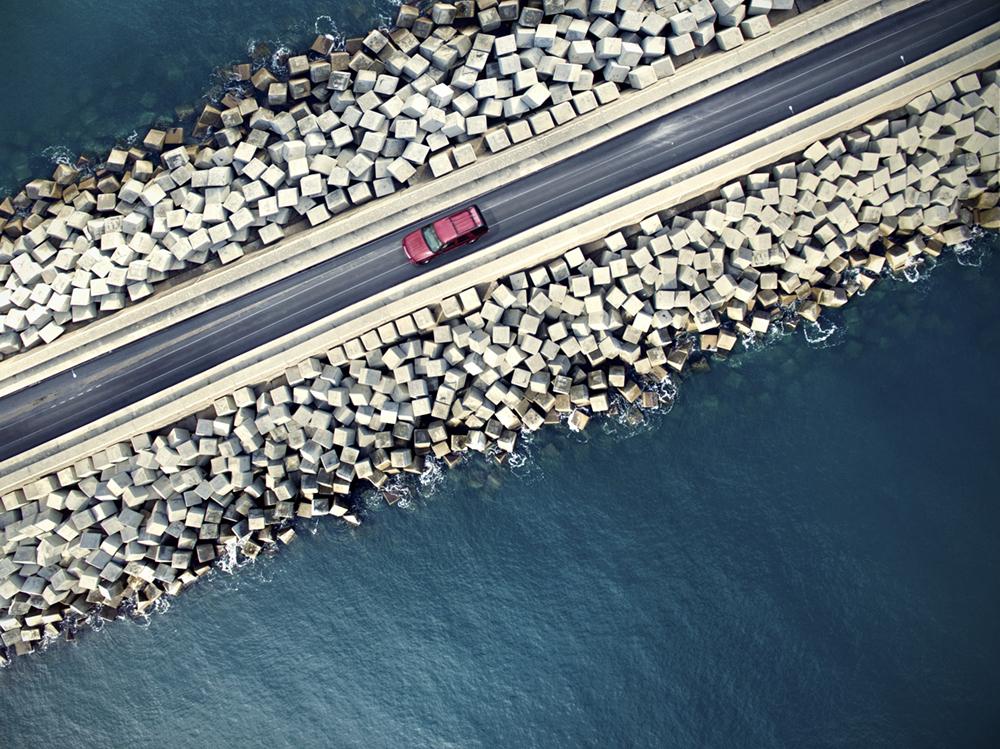 This supports the growing interest in tandem cells: solar cells made by stacking two or more cells on top of each other to reach a power conversion efficiency (PCE) that is higher than what would be possible with the individual technologies. Since solar cells with wider-bandgap photoabsorbers generate higher voltages, thermalisation losses are significantly reduced in tandem solar cells, compared to single junction solar cells that absorb the same number of photons. This results in a higher PCE for tandem solar cells. 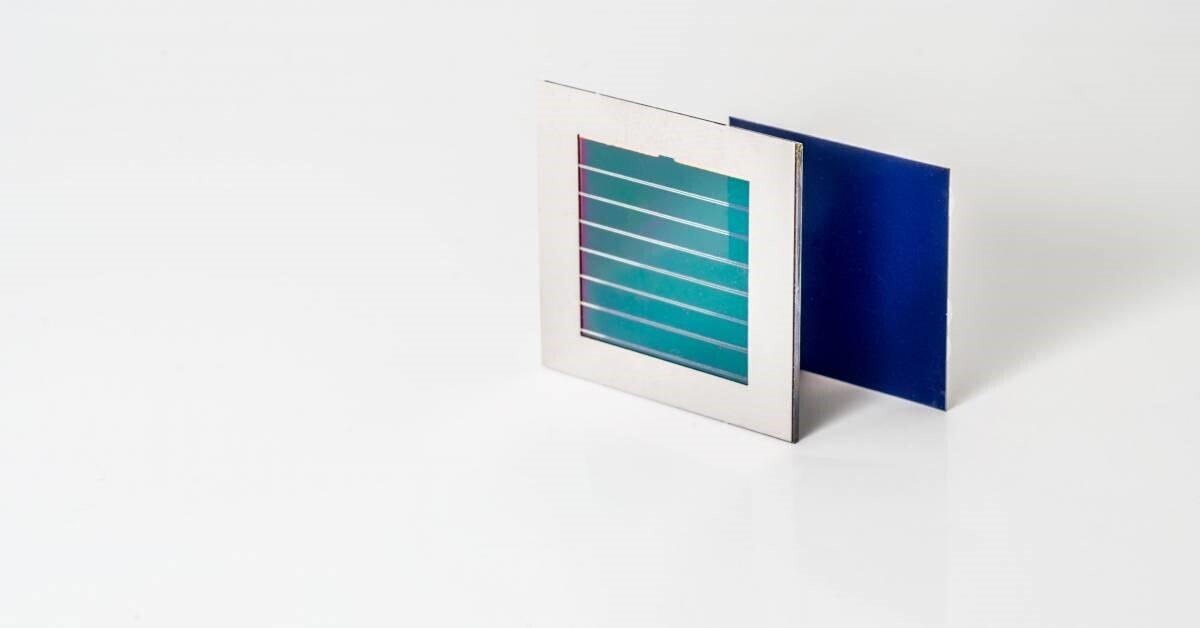 An obvious requirement is that the material of the top cell is transparent to the light that it doesn’t convert into electric energy. An additional boost is given if the materials in the stack are sensitive to a distinct part of the light spectrum, so that they don’t scavenge on each other’s conversion potential. The material that captures the shortest wavelengths (e.g. blue and green) will then be on top, while the bottom material converts the longer wavelengths (e.g. red and near-infrared), as depicted in Fig. 1.

Tandem solar cells have been widely used for space applications. Such tandem solar cells have a high degree of complexity and are expensive to manufacture on a large scale. For terrestrial applications, manufacturing costs profoundly influence the extent of deployment. At the moment, the terrestrial PV market is dominated by crystalline silicon (c-Si) solar cells. Adding a low-cost absorber on top of the c-Si, resulting in high-efficiency tandem solar cells, is a promising route to lower the levelised cost of electricity (LCOE) even further. Until a few years ago, there was a lack of efficient, low-cost solar cells that could be used in a tandem configuration with the PV technologies established in the market. However, the advent of perovskite solar cells and their rapid progress has changed this deadlock. 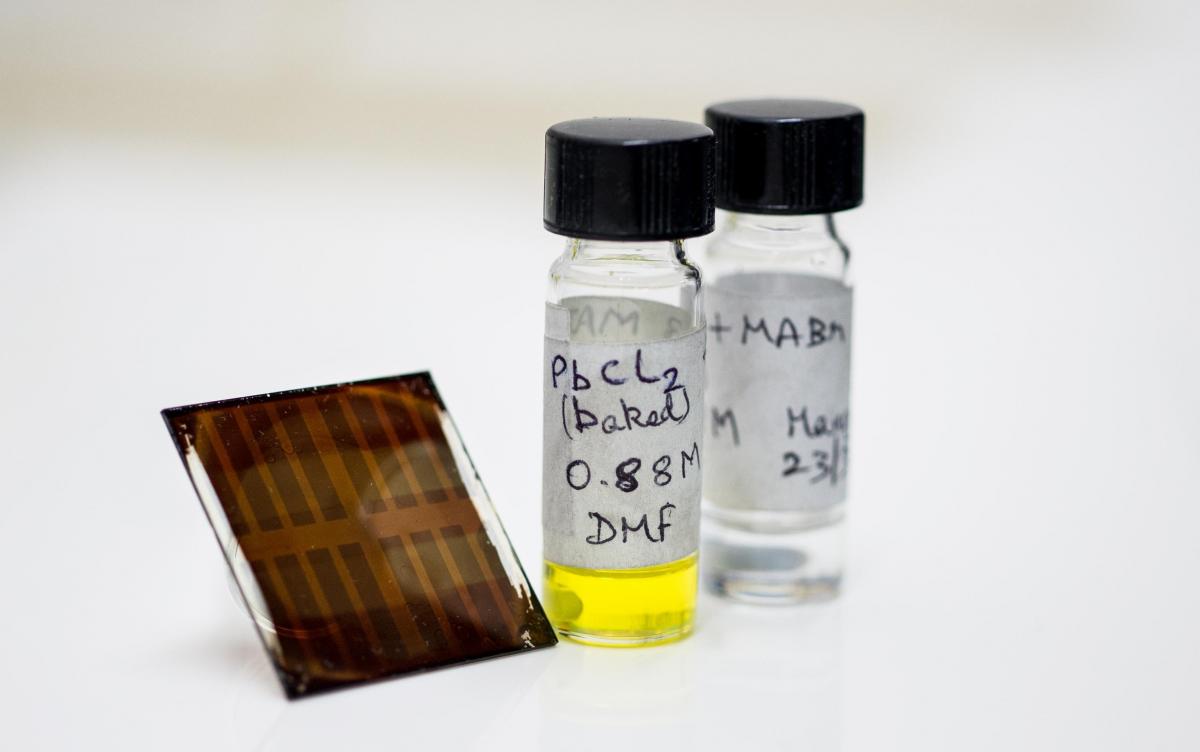 Perovskite, a low-cost mineral containing calcium titanate (CaTiO3), was discovered in 1839 and named after the Russian mineralogist Lev Perovski. Today, the term perovskite is used to denote all compounds having a crystal structure similar to CaTiO3. The generic chemical formula of perovskites is ABX3, where A and B are positively charged ions of different sizes and X is a negatively charged ion. Depending on the choices of A, B and X ions, perovskites can be insulators, semiconductors, conductors or superconductors. Perovskites used in solar cells are crystalline semiconductors called hybrid metal halide perovskites. In such perovskites, the A site is usually occupied by monovalent methylammonium CH3NH3+ (MA) or formamidinium CH(NH2)2+ (FA) or caesium (Cs+), or a combination of these. The B site is taken up by bivalent lead (Pb2+) or tin (Sn2+), or a mixture of both. The X site is reserved for halides, such as iodide (I–), bromide (Br–) or chloride (Cl–), or a mixture of these.

Perovskites are a promising material to make high-performance tandem cells. They can be processed into thin, flexible, (semi)transparent modules that can achieve a high power conversion efficiency. They are inexpensive to produce, thanks to the low-cost materials and the deposition that can be done at near to room temperature. This reflects itself also in an energy payback time that could be upto ten times shorter than current industrial Si PV modules.The perovskites for solar cells have high optical absorption with a sharp onset for the visible light. Hence, a perfect match for tandem cells.

Next to the low cost, an interesting property of perovskites, particularly attractive from a tandem perspective, is the ease of bandgap tuneability. The bandgap of most perovskites can be tuned simply by varying their chemical composition, most commonly the anion; the replacement of ions alters the size of the perovskite crystal lattice, thus changing the bandgap. This interesting property enables the fabrication of perovskites with bandgaps ranging from 1.1 to 3.2 eV, as demonstrated in Fig. 2. The most commonly used perovskites for high efficiency solar cells have a bandgap of ~1.6eV. For tandem applications with c-Si and copper indium gallium selenide (CIGS), perovskite bandgaps between 1.7 and 1.8 eV are of particular interest.

Fig. 2: Variation of the composition, here the iodide/bromide halide ratio, results in changing the width of the bandgap and thus the absorption edge and colour of the perovskite film

While for single junction perovskite cells power conversion efficiency (PCE) over 25% has been reported, recently a tandem result with a perovskite cell on top of silicon bottom cell with 29.15% efficiency was shown.[1] This confirms the high potential for such tandem technology to substantially surpass the efficiency limitations of single junction PV cells. However, this result was obtained using lab processes on an area of 1 cm2 and placed on a silicon cell with polished front surface. This involves cumbersome and time-consuming additional steps incompatible with high-throughput industrial manufacturing.

At EnergyVille/imec, a fully scalable tandem solar module employing a methylammonium lead triiodide perovskite top solar module stacked onto an interdigitated back contacted c-Si bottom solar cell was reported in 2018. Both devices have an identical aperture area of 4 cm² (Fig. 3 left).[2] With a combination of optimized transparent electrodes and efficient module design, this multi-junction solar module exhibited a power conversion efficiency of 25.3%.  Later on, another perovskite tandem module, this time stacked on top of a CIGS module (Fig. 3 right), was produced to boost the single junction efficiency by several percent. This work was done in collaboration with one of the world-leaders in CIGS technology, the Zentrum für Solare Energiewirtschaft (ZSW, Stuttgart, Germany).

These top results not only proved the worth of perovskite as a top cell material, they also point to the fact that – because of its characteristics and flexibility – perovskite technology could be used to boost virtually any type of single-junction solar cell.

The tandem modules that EnergyVille/imec initially designed and tested were so-called 4-terminal modules (fig. 4, left), with the two subcells of the tandem electrically isolated and each having their own wiring. As a result, the finished product has four external electrical wires therefore requiring an additional convertor. In a 2-terminal module (fig. 4, right) the two subcells are electrically connected in series and the module has only two terminal wires, a simpler configuration that is next on the optimisation agenda. 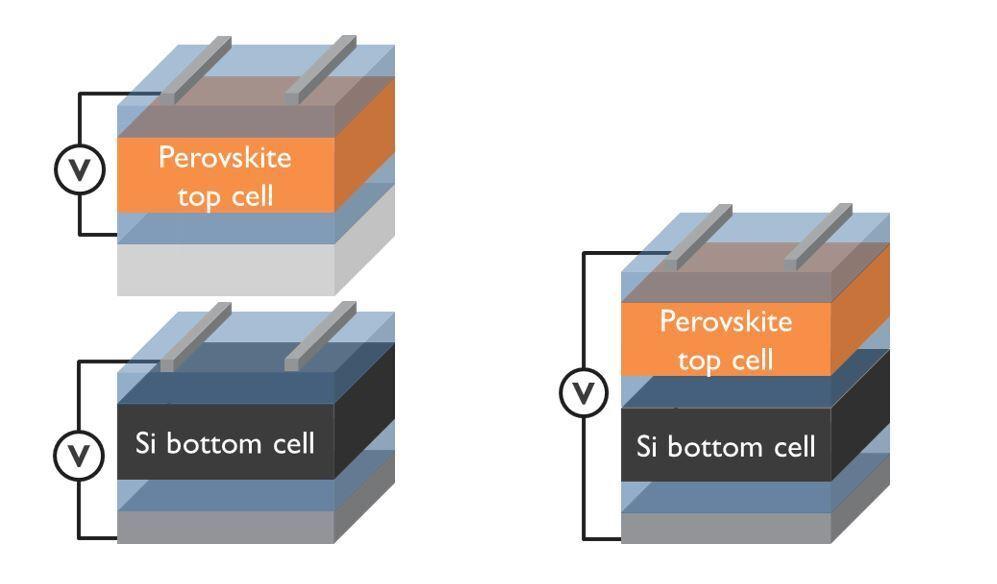 With the added complexity, why go for a 4-terminal setup? Mainly because it allows getting the best out of the two subcells. With a 4-terminal setup, it pays to use the best, optimised single-junction cells as a subcell. A 2-terminal configuration, in contrast, comes with the constraint that the series connection requires the currents to match. This may eat into some of the edge of the subcells.

Overall, the difference in efficiency between 4-terminal and 2-terminal modules is only small when measured in the lab under standardised conditions. In the field, however, with light conditions that change from minute to minute, the 4-terminal architecture has the potential to generate a higher yield. The downside of course is the added cost for the separate wiring, convertors, junction boxes… Therefore, companies like the start-up Oxford PV have shown much interest in the 2-terminal solution, which can be assembled into panels that can simply replace today’s panels without additional cost.

Despite the fast progress on PCE for such 2-terminal PV technologies, new challenges already arise. In contrast to cSi cells, solutions for metallisation, interconnection and module lamination for tandem solar cells are still at a very early R&D stage. Since the perovskite materials can’t sustain the same mechanical and thermal stress as silicon, novel materials and processes have to be developed to make sure that full modules and panels can be manufactured using tandem cells, otherwise market uptake of this new PV technology will not happen. Based on EnergyVille and imec’s vast knowledge on module technology, with advanced metallisation processes and innovative interconnection routes developed over the last few years, we’ve set out a roadmap as depicted in Fig. 5 to bring the tandem cells and modules to technology levels ready for product integration. At first vehicle integration is targeted. Whereas current cSi PV roofs in cars like Toyota Prius have a power density below 190 W/m2, the use of perovskite-on-cSi tandems has potential to bring this beyond 230 W/m2. With improved reliability and upscaled processing, the building-integrated PV market will become accessible. Further cost reduction in the end will also open up the possibility for tandem technology to be used in solar farms and utility scale. 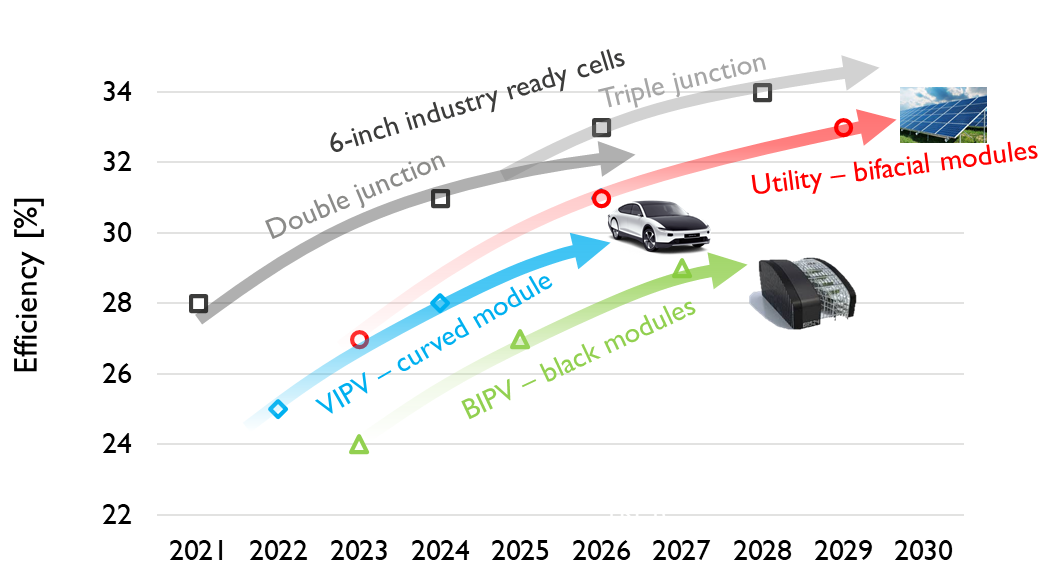 Finally, tandem technology can have major importance for power-to-molecule applications like hydrogen generation. Investigating this potential is part of the recently launched PROCURA project.

The recent advent of perovskites suitable as solar cell material, has for the first time opened the route to low-cost fabrication of tandem PV for terrestrial applications. Though still on small area, the huge potential of such tandem technology has been demonstrated in last few years combining perovskite with established technologies like cSi or CIGS yielding efficiency surpassing that of the single junction solar cells. At EnergyVille, we’ve now taken up the challenge to pave the way for effective industrialization of these low-cost tandems. Scalable processes are developed and stepwise integration in selected applications is expected to accelerate market uptake in coming years. 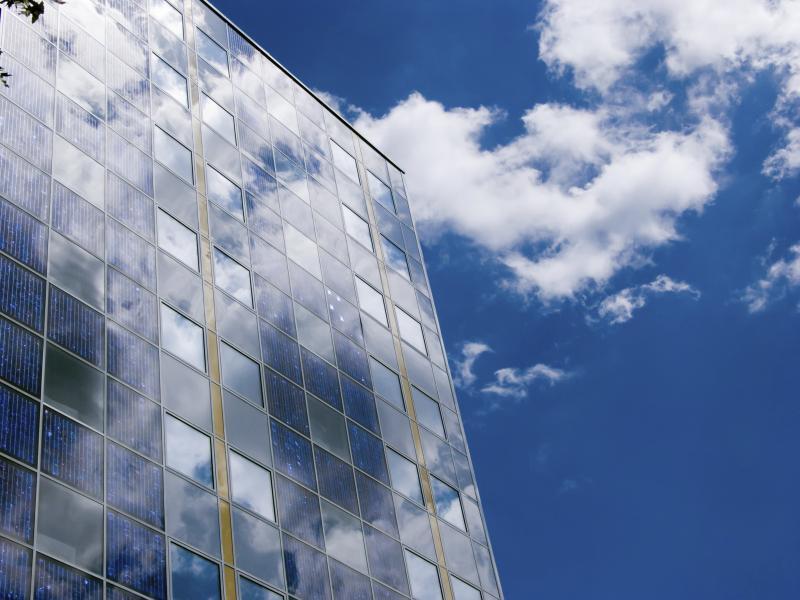 Following this expert talk we organized a webinar about the role of perovskite to come to more sustainable, cheaper and more efficient PV panels. The speakers were Tom Aernouts (EnergyVille/imec) and Bart Vermang (EnergyVille/UHasselt). 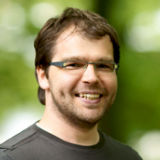