The PV market is blooming and currently dominated by silicon

In 2019 large-scale PV systems are very cheap, in many cases they even deliver electric energy at a price lower than that of conventional electric energy sources. Moreover, PV prices continue to decrease while conventional energy pricing will certainly increase. As a result, many studies anticipate a sustained surge in PV capacity in the next years. Currently, 95% of all module production is Silicon (Si)-based, which obviously is the market leader. Figure 1(a) depicts such a Si solar panel, used in building applied PV (BAPV, generally installed on top of roofs) and (large) utility-scale PV systems. In the early days of PV rooftop installations BAPV systems could be very dreadful, but looks have improved greatly, as is shown respectively in Figures 1(b) and (c).

Challenged by thin film PV, which holds potential but has a small market share

Alternative commercial PV technologies with high power conversion efficiencies (>22% in the lab, and >18% for best commercial systems, which is very similar to high-quality standard Si PV technologies) are based on thin films as copper indium gallium selenide (CIGS) or cadmium telluride (CdTe). Thin film PV systems are using very thin films as is shown in Figure 2(a), where a CIGS solar cell of a few micrometres thick is shown (as compared to Si solar cells with thicknesses exceeding 100 micrometre). Next to high efficiency, these thin film technologies have also been shown to be environmentally friendly, reliable, recyclable, cost-efficient, and have superior performance in diffuse light conditions and at high temperatures. Unfortunately, research and development (R&D) for thin film PV technologies started several decades after Si R&D, and despite all their intrinsic benefits, thin film PV technologies still only represent a small market share (i.e. about 5% as is shown in Figure 2(b)). It seems to be very difficult to compete with a technology with a long history, many industrial players, and strong in scaling economics, as Si is. Hence, a niche market large enough is very welcome.

BIPV are a recent type of PV applications, which refers to PV systems integrated into the building envelope elements, such as construction materials as roof tiles and ceramic or glass façades. It is a state-of-the-art technology that allows the integration of PV cells into architecturally pleasing buildings, which is important for cities and thus definitely not a small market (as an estimated 90 % of electricity consumption occurs in large cities). Figure 3 gives a few thin film BIPV application examples: The Hantile of Hanergy (who integrates solar power products to flat and slanted roof-tops, windows, façades, curtain walls and ceilings), and BIPV shingles of Flisom (whose lightweight, jet black and ultra-thin, flexible solar panels can be applied on roofs and façades).

Being lightweight and flexible, also in size and colour, thin film PV systems have great potential for BIPV applications

Thin film PV technologies inherently hold some key advantages for their integration into successful BIPV concepts. As already shown in Figure 2(a) thin film PV solar cells are very thin, which means that they can be integrated onto flexible (e.g. stainless steel and polyimide films) and thus lightweight substrates. Figure 4 depicts two examples of such flexible and lightweight thin film PV installations, as accomplished by MiaSolé and Midsummer.

Thin film PV systems are also visually superior due to the applied solar cell interconnection strategy. Figure 5 clarifies how thin film PV modules consist of series of long solar cells adjacent to each other – vertically depicted in Figure 5 – with microscopic openings in between (as compared to aesthetically less favourable arrays of Si solar cells in Si modules, e.g. the 6x10 solar cell array in Figure 1(a)).

This monolithic interconnection approach results in visually pleasing ‘all black’ standard thin film PV modules. Additionally, it also provides flexibility in module size and colour, which is proven by AVANCIS in Figure 6(a) (note that NICE Solar Energy has a very similar coloured product offering). If the openings in between the adjacent solar cells are enlarged even semi-transparent modules can be fabricated, see Figure 6(b). In BIPV applications, also diffuse light conditions, high temperatures and partial shading are more commonplace, perfectly fitting thin film PV technologies. In summary, thin film PV technologies are extremely versatile making them highly applicable to BIPV systems: they can be applied to curved surfaces; they can be custom-made; they can be different colours or transparent so that they can be integrated into windows; and they can even be made from flexible material.

Most (CIGS) thin film PV companies – e.g. AVANCIS, NICE Solar Energy, Midsummer, Flisom, all Hanergy companies (Solibro, Miasolé, Global Solar) – are offering PV products targeting BIPV applications. During the 10th International Workshop on CIGS Thin Film Solar Cell Technology (CIGSTECH) it was clear that BIPV applications are becoming a key market for these companies. As a result, a wave of new, large-scale investments in CIGS thin film PV system manufacturing from major energy and industrial players is currently underway. Around 600 MW of CIGS production capacity was added in 2018 with expansion plans for multiple gigawatts of production. As an example, Hanergy is currently pursuing a production ramp of more than 600 MW of CIGS capacity in both flexible and on-glass formats. This focus of thin film PV manufacturers on BIPV applications is very much linked to the evolution of the regulatory framework. An important piece of European legislation is the EU’s Energy Performance of Buildings Directive, which requires all new buildings to be nearly zero-energy by the end of 2020. BIPV systems will be crucial for the decarbonisation of the building stock in Europe. Today, buildings are responsible for 36% of the EU’s CO2 emissions, but buildings could supply 32% of the EU’s energy demand – if they used on-site generation installations, such as solar panels or building-integrated solar (BIPV). Will this indeed enable take-off of thin film BIPV systems? The near future shall tell us.

On the one hand, there are research teams focusing on chalcogenide and perovskite material development, and optimization of solar cells and modules, including high-efficiency tandem concepts (e.g. perovskite on chalcogenide tandem). On the other hand, there is a team working on enhancement of PV module design strategies (e.g. for BIPV applications) and energy yield forecasting (there is an outdoor metrology lab for BIPV). Of course, there is plenty of collaboration between all teams mentioned. 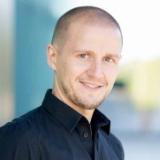