Ecoscore is an environmental score for all cars - new and old(er) - that provides an indication of a vehicle's overall environmental friendliness on a scale of 0 to 100. The higher the score, the more environmentally friendly the vehicle.

To calculate the score, several damage effects are taken into account: greenhouse effect, air quality (health effects & effects on ecosystems) and noise pollution. Both emissions while driving and impacts associated with fuel production (such as electricity generation for electric vehicles and oil refining for diesel) are included. The Ecoscore environmental assessment combines these different impacts into one indicator. Ecoscore goes beyond CO2 emissions or Euronorm, making it the ideal way to neutrally compare the carbon footprint of different cars using different fuels.

On the website, users can look up a vehicle's Ecoscore themselves based on their chassis number, or by make and model. You can also calculate the Ecoscore yourself.

New features on the Ecoscore-website 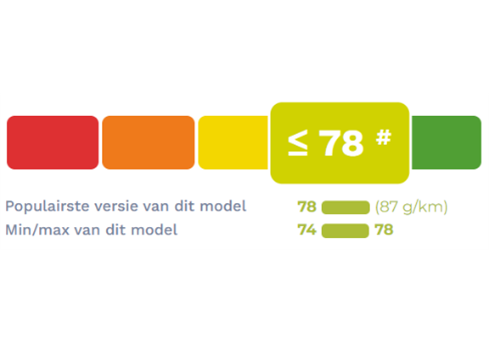 Following the 20th anniversary of the project, the Ecoscore-website – supported by the three regions - was redesigned.

But the Ecoscore project goes beyond assigning a valuable environmental score. It also tracks the evolution of the Belgian fleet and publishes statistics about it. Users can now look up these statistics themselves via various search functions (by region, lease vs. private, ...) in a handy data visualization tool.

For 2022, the big drop in new car registrations is striking. Never in the last 25 years have so few new cars been registered as in 2022: just over 368,000, down 4% from 2021, and 33% from 2019. The number of registrations was already declining during the corona years, but persistent supply problems in the car market and the economic malaise further reinforced this process.

New plug-in cars - battery electric cars (BEVs) and plug-in hybrids (PHEVs) - did do well. More than 95,000 of these cars were sold for the first time in 2022. That is a lot more than the number of new diesel cars (60,000), which ensured that we achieved the lowest average CO2 emissions since the Ecoscore project started. CO2 emissions (NEDC) dipped below 90 g/km for the first time. 10.2% of newly registered cars are BEV, which for the first year is better than the Flemish 2020 target of 7.5%. The big driver behind this increase was companies: as many as 89% of new plug-in cars are company cars (including lease cars).

Yet we see two trends that have a negative impact on the environment and road safety.

For the first time, more SUVs (51%) were sold than other cars. An SUV is heavier, less aerodynamic and more powerful than comparable alternatives. Therefore, they emit more CO2 and have a lower Ecoscore. So the environmental progress could be greater if people would choose less for an SUV.

Due to the rising popularity of SUVs and the increasing share of plug-in cars, the average weight of new cars has increased by more than 10% in the past 3 years (after years of stagnation). This is an evolution that is not ideal in terms of road safety either. Although BEVs and PHEVs have obvious environmental benefits, they are heavier than a classic combustion engine car. A new gasoline car weighed 1337kg on average in 2022, while a new PHEV remained just under 2 tons (1946kg), and a new BEV weighed even more than 2 tons (2055kg).

The most popular models by fuel illustrate the above findings.

Due to the increasing weight of electric and plug-in hybrid cars and the fact that material use is rightly attracting more and more attention - just think of the content of rare raw materials in the ever-growing batteries in electric cars - the Ecoscore project is far from over after 20 years. In 2023, EnergyVille / VITO and VUB experts will investigate whether and how material use - including battery production and recycling - can be integrated into the Ecoscore in the future.