Frank Meinke-Hubeny of VITO-EnergyVille sets the scene by summarising that in the European context, offshore wind has reached a capacity of 22 GW, generating 49 TWh per year. This is 27% less than the target set by the Member States in their National Renewable Energy Action Plans for 2020. Nevertheless, the ambitions for 2030 are high: a total capacity of 111 GW is aimed for and nine countries that currently have no offshore capacity are planning to develop their capacity. Connected to the development of capacity is the evolution of costs. In the 2010-2018 period, costs declined by 22% and for the future, IRENA expects a further 28% reduction of capex by 2030 and 45% by 2050.

EnergyVille performs long-term scenario studies for Belgium on a regular basis. The latest study, on behalf of ENGIE, extends the horizon to 2050. This study comprises a central scenario (where nuclear energy is decommissioned totally) and two sensitivity analyses (where 2 GW nuclear capacity is extended for 10 and for 20 years). Looking at our neighbouring countries, from 2020 to 2030 a decline in thermal capacity of 70 GW is predicted, combined with an increase of renewable generation. With around 30% ,offshore wind claims a significant share in this regard. When running the scenario, the growth of Belgian offshore capacity is limited to 4.6 GW. As this is a cost optimisation model, it does take into account neither subsidies nor other forms of support and investments are driven by cost efficiency.

Frank concludes that there are clear opportunities and hurdles to the further development of offshore wind capacity. Decreasing costs (a result of active competition via auctions organised by Member States), the large spatial potential in the North Sea and the high availability factor of 40% and more, certainly constitute the positive aspects of this technology and will enable further growth. More challenging are e.g. the large scale of investments, the required grid upgrades on the mid and long term, the public opposition and the required time for international collaboration. 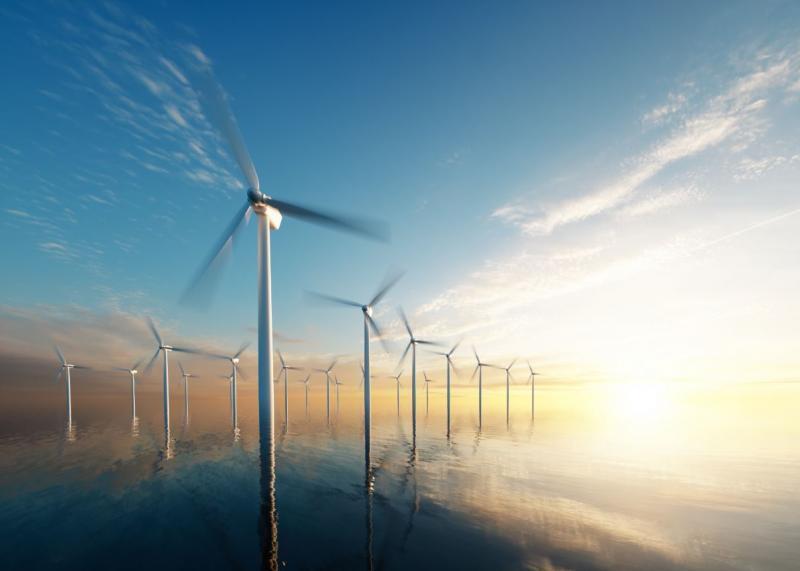 Ann Overmeire, COO of the Flemish Blue Cluster, highlighted the importance for the industry and stated that, although the total available surface is rather small (3,454 km2) and the development of offshore wind has seen a long trajectory, Belgium can and should be more proud of its achievements. Currently, 9 wind farms are operational, the installed capacity amounts to 2,3 GW and we rank 4th on a global scale in terms of production capacity (coming after the UK, Germany and China). The ambition for 2030 is to double the capacity to above 4 GW.

Behind these ambitions is an entire Belgian value chain: project development and manufacturing (except for turbines), design, assembly and installation, operation and maintenance, support services and auxiliary equipment. Collaborations exist with R&D entities, and test sites are available, which is quite unique. A study in 2017, estimating the socio-economic impact of this sector, found that it created 16.000 permanent jobs and had an impact of 1 G€ of GDP in Belgium.

The sector consists of big players but equally involves a large number of innovative SME’s. There are two reasons for this global pioneering position: the development of the domestic market and the R&D efforts. The Blue Cluster made a roadmap for further development of the sector and identified 3 growth areas: LCOE-reduction, development of a framework for renewable energy (due to spatial constraints, several activities need to be organised in a smart way, bearing in mind the impact on the North Sea, given Natura2000 restrictions), and emerging technologies and services (e.g. floating offshore wind).

The encounter was concluded with interactive debate including as panellists:

As our trusted moderator, Luc Pauwels (VRT) guided the discussion.

This resulted in following highlights of the debate:

The process for permitting is ongoing and Elia hopes everything will be ready when the new zone is auctioned. They interacted with concerned citizens during the Ventilus and Boucle du Hainaut project in consultations and debates with all stakeholders. Their experience is that resistance remains high, people are concerned about the impact on the landscape, on the real estate prices, etc. Often, compensations are not sufficient to take away these concerns and it is difficult to explain that putting cables in the ground is not always possible for the needed functionalities. The geographical situation and population density are what they are. Also, in the south of the country there is considerable resistance against projects, as people realise that this region has the largest potential for onshore wind. However, proper infrastructure is needed for the energy transition and compromises are required.

Participation (financial) already exists. It is considered feasible and important by the panel. In this context, the predictability of the business case is important. If the mechanism for the second tender will enable a stable revenue stream, it will be interesting for private investors. If the risks are too high, however, it is less attractive for citizens to participate in these projects.

This has been studied by the Belgian Offshore Platform (BOP). They conclude that it is possible to increase the capacity of the second zone to approximately 4 GW, resulting in a global capacity of about 6 GW. This implies however, a smart design and operation, and looking to multi-use so that all activities can have their specific place and area. Think of the combination with for example aquacultures and transport. A second aspect in increasing the potential consists of a hybrid interconnection, for example to the Nordic area of the North Sea, as recently announced by the minister. Here, a lot of renewable production is present but typically, these countries do not have the matching demand.

Another evolution taking place, in this context, is the production of green molecules.

The lifetime of the turbines installed after 2015 is longer (30 years) than those installed earlier (around 25 years). A different element however, is the foundation. Estimating those lifetimes or predicting when they are ‘done,’ is more difficult.

With the turbines available on the market today, it is possible to fit more than the foreseen 4 GW, both in the planned Princess Elisabeth-zone and the existing one. The bottleneck here is transmission capacity. It is difficult to foresee and anticipate offshore developments. The 4 GW needs to be considered as peak load. The question is what to do in case of surplus-production. Again, this connects to green molecules and hydrogen. Too often, the focus is on electricity while 60% of our energy demand comes from heating. It is equally important to find solutions for the latter.

A hybrid interconnection has a dual function: interconnecting two countries, and connecting offshore to onshore consumption. It has several impacts: a decreasing spread in prices between countries, diminishing prices for consumers, and a connection between multiple grids.

For balancing the grid, the 2 GW offshore connected today does not endanger the stability of the grid. However, increasing the offshore capacity might change this situation. Studies are in progress to estimate this impact and required actions to remedy a sudden drop of generation output. The disadvantage of the Belgian offshore zones is that they have coherent weather conditions. Although technology evolves and turbines will be better equipped to deal with storms for example, it remains a fact that if there is a storm, it will hit both zones at the same moment. Nevertheless, such a output drop did not occur in 2020, considered to be a very windy year.

The more renewables, the more flexibility is needed in the system. However, this works both ways: offshore capacity can also be asked to shut down for grid reasons, which would of course be impossible to do with a nuclear plant. Demand side flexibility (e.g. in industry, households) is complementary. Zooming in on that flexibility for the industry, this is happening as we speak. In the last half year, the amount of PPAs has increased significantly mostly signed by chemical factories, distribution centers, etc. Often, an aggregator is involved, who takes the responsibility/risk. We also notice that the traditional companies (e.g. Shell and BP) now increasingly become interested in renewables and change the way they operate, invest and finally, through bidding on the new zones in the UK, change their products as well.

The possibilities of hydrogen are being explored but some main trends are already clear. Hydrogen is part of the solution. The first principle is that energy sources have to be used in the most efficient way, starting with direct electrification, and complemented with solutions as green molecules and hydrogen offering solution for specific industrial challenges for example. The crux is to find the right balance and what works best for which country, for which type of industry.

On the topic of efficiency losses, it is indeed true that these occur in the process. However, that is still a preferable scenario to curtailing. We have a significant industrial sector, where hydrogen can be used directly. Studies are also being conducted into using it as fuel for vessels.

It is important to distinguish a bottom price from a subsidy. It is difficult for developers to make stable calculations with the uncertainties around energy mix, nuclear extension, influences on the electricity price, etc. To decrease market risk and risk exposure, a stable regulatory framework is needed. Additionally, we have come at a point where it becomes increasingly important to collaborate throughout the whole value chain, to come to joint solutions.

As a preliminary summary of the debate following 4 points were highlighted:

With specific input from the BREGILAB- and EPOC-projects that received support from: