After a very successful first session on onshore wind, the Energy Encounters focused on photovoltaics. 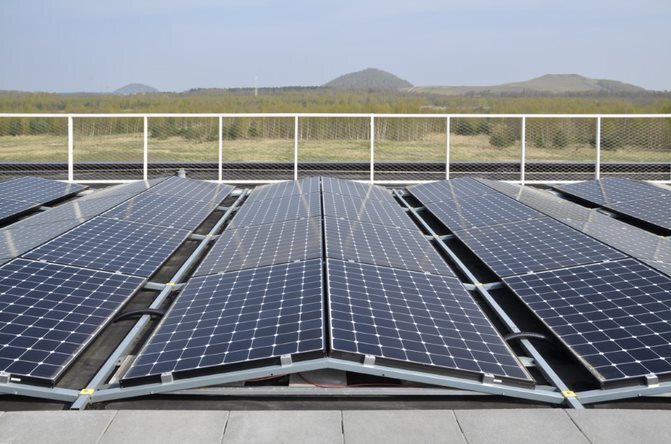 Frank Meinke-Hubeny of VITO/EnergyVille kicked-off with a birds-eye perspective illustrating that, in the EU, PV has grown tremendously. At the end of 2019, the cumulative installed PV capacity in the EU 28 was approximately 131 GW , generating 132 TWh. With these numbers we surpass the targets defined in the NREAPs (national renewable action plans) for 2020 by 46%. Various phases can be discerned in the development of this technology: initially, from 2005 to 2014, there was rapid technological progress, from 2014 to 2018 the development slowed down as new policies with revised financial support were introduced. From 2019 onwards, a different growth path becomes apparent, facilitated by auctioning policies and capacity based power purchase agreements. Belgium has known a similar development and when looking at the absolute installed capacity in the EU, it ranks 7th. When regarding the installed capacity per capita, it performs better with a 3rd place.

End 2019, in Belgium, 4.5 GW had been installed and 4.3 TWh had been generated. Installations are mostly located in Flanders (75%) and less so in the Walloon Region (25%), the amount of installations in Brussels is limited. The Bregilab project explores amongst others the role of PV in the energy transition and its potential in Belgium. When looking at this from a spatial point of view and taking into account the available roofs (no ground mounted installations), the conservative estimation in terms of capacity amounts to 84 GW. When assuming energy cost optimisation, the central scenario of the long term study gives a growth of installed capacity to a total of 12.6 GW in 2030 and 23 GW in 2045. The NECP aims at 11 GW in 2030.

Although PV has the largest capacity growth potential of all renewable energy sources – due to decreasing costs, large spatial potential and the integration potential in local energy systems – some challenges arise: investors and investments are distributed (households), the development is regulation and policy sensitive, the capacity factor is rather low (12%), and the connection to the grid can cause local challenges. Also, with the number of installations rising, the mismatch between peak consumption and peak production is growing, which increases the importance of the timing of consumption vis à vis the amount of energy produced. In this regard, the digital meter is a technical precondition for the participation of the prosumer in the market.

A complementary innovation perspective was presented by Eszter Voroshazi for imec/EnergyVille.

She confirmed that IEA has named PV the “king of electricity”, a sign of its dominating role and expected growth. The assumption is that, in the coming years, PV will reach the 1 TW barrier and by 2030 will reach 10 TW. As we are entering this “TW era”, the challenges that PV faces, are changing as well. First, instead of only becoming the lowest cost in power generation, it should become the lowest cost in use as well; taking into account the need for storage, e.g. batteries, and balancing and other services. Further efficiency increases and lifetime extensions are crucial in this regard and developments in these domains comprise higher efficiency of the technological parts, but also the rise of dual use large scale PV, system designs to increase energy yield, and predictive and automated operation and maintenance systems.

A second important step in the further development of PV, is the integration in the urban and built environment. Three big requirements are put forward in this regard, 1) application-centric design, 2) aesthetics and seamless integration and 3) mass customization supported by automation tools and processes. The latter is posing the biggest challenge today but also provides opportunities for local PV manufacturing, as there is a strong link with local customers. Important to note is that integrated PV can mean much more than building integrated, think of electric vehicles, trains, but also infrastructure like noise panels. Also, for this type of PV, an increase in efficiency is underway, with tandem cells and triple module applications. Imec/EnergyVille has developed a roadmap in this regard.

The third aspect in the “TW era”, is the circular approach: reuse and repair should be considered before recycling. In the coming years, PV waste will increase significantly and a considerable share of that will be in the EU as the early subsidy schemes will come to an end. Imec/EnergyVille conducted an in-depth study on the PV re-use sector and concluded that opportunities for PV module re-use will increase, but that circularity and CO2 regulations would have to be implemented to fully reap the benefits. Also, the EU Commission is supporting this and wants to develop an ecodesign label for PV.

A study from Fraunhofer concluded that when PV is produced in the EU, it is possible to reach lower carbon footprint compared to when it is produced in Asia for example. This is of course a massive opportunity. Further, the current manufacturing activities in Europe take place on the module-level, and not so much on cell or wafer manufacturing. The conclusions of the studies mentioned lead to the expectation that in the near future, the full value chain will come to Europe.

The encounter was concluded with interactive debate including following panelists:

For the second time Luc  Pauwels (VRT) moderated the session with a lot of enthusiasm. This resulted in following highlights of the debate:

One of the current barriers to put solar panels on all roofs (especially those of apartments), is the legislation on distribution of electricity. Currently, limited numbers of installations are installed on apartment buildings because the limitation of the business model, e.g. the electricity cannot be distributed and therefore can only be used for the common consumption (for example the lighting in the hallway and the elevator). One of the possible solutions is the creation of energy communities and energy sharing. New legislation on this topic is expected before the summer (for Flanders).

Another hurdle in using the spatial capacity, consists of the investment costs. Although costs have dropped, this is not feasible for everyone. Third party investors can offer solutions, although they rarely interact with the residential sector. Here, an opportunity for energy communities and cooperatives arises, as it is easier to draw up contracts and build trust among citizens and households, than with a commercial party involved.

Concerning quality and safety of new panels, the development of predictive maintenance will lead to a boost for efficiency. Currently, sufficient standardisation is put into place to ensure the panels as such are safe.

It was also argued that the goal should be to use the flexibility already present. A lot of households heat their water with an electric boiler. It does not matter whether the water is heated in the morning or the afternoon, so it would be sensible to use that flexibility before installing batteries.

Whether it is sensible to install a battery, depends on the user profile. The problem lies in the fact that these profiles are often unknown, as there is little data available. The digital meter could provide that information and therefore, a panelist advised to install battery-ready PV, so keeping in mind to install an inverter that will allow the installation of a battery later, and to reconsider investing in a battery after more information is available.

As a preliminary summary of the debate following 4 points were highlighted: