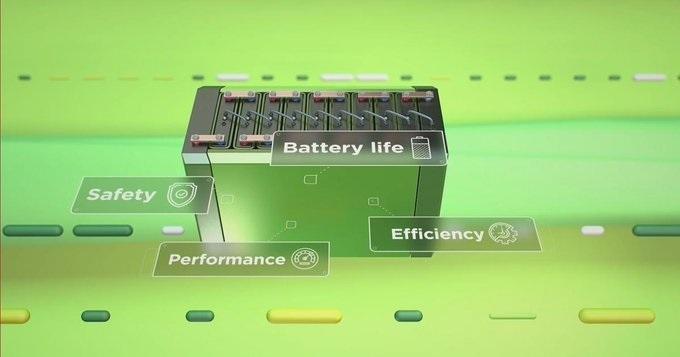 Electric cars are full of electronics. These systems are used not only to assist driving and increase comfort but also to monitor the condition of the batteries and adjust their operation if necessary. This is done via the battery management system, the BMS. It ensures, for example, that during discharging and recharging, all the individual battery cells remain within the limits that guarantee the highest level of safety but also the longest service life. In fact, the BMS constantly monitors the battery's health and safety status and, based on this, gives instructions to adjust its performance.

The BMS is currently usually located on top of the battery module, as an external brain consisting of a central computer, dense wiring and numerous sensors. This location is partly due to the fact that the BMS is not developed by the battery manufacturer itself, but is only installed on the modules later by the so-called battery integrator. A battery pack is then typically made up of different modules.

From module to cell level

Not only does this mean that the BMS takes up extra space and weight in the electric vehicle, but the wiring is often quite complex and makes battery construction a time and cost-intensive process. This configuration also makes possible battery re-use more difficult as the BMS has to be replaced frequently. "The result is that we lose the information about those cells' characteristics," says Serge Peeters of VITO/EnergyVille. "But we need these data to guarantee safety and to be able to calculate the cells' remaining service life and therefore their residual value."

So-called smart battery cells can solve these problems. The BMS's 'intelligence' is spread throughout the module, embedded in the individual cells. "With smart cells, the BMS's hardware is directly linked to the individual cells", says Peeters. "That has several advantages, including a cost reduction from much less complex wiring."

Another advantage is that the cells are already 'smart' when they leave the battery factory. Their condition is therefore monitored from the very beginning and the cells carry this information with them throughout their service life. This allows them to be read out at any time, for example when a battery module is dismantled and the status of the individual cells is checked. Peeters: "This enables us to select the strongest cells or modules more quickly, for example, and use them again for the next application. As a result, they get a second life with impressive remaining service life."

The smart-cell technology still needs to be developed, fine-tuned and extensively tested and proven - and this against a background of a rapidly developing and expanding range of battery applications. A first step in development is currently taking place in the battery labs of VITO/EnergyVille, partly within the framework of European Horizon 2020 funding via the Current Direct and NAIMA projects. "We are still in the early stages of development. Over the past year, we have determined the specifications of, among other things, the microchips and microsensors with which the smart cells will be equipped. This was done in close consultation with battery manufacturers and integrators to see exactly what they want and what we can offer them," says Peeters.

Much more than today's battery cells, the BMS will be able to keep track of the characteristics and the performance of the smart cells through the various stages of their life cycle - from cell assembly and module building through the operational to the diagnostic phases. This last phase is part of a continuous reuse and recycling of batteries. Ultimately, strict monitoring must become part of the so-called battery passport that each cell will carry, and which learns what materials it is made of, where and when it was produced (this is the 'static' information) but also how it has already been used and what impact this has had on its service life (the 'dynamic' information). Despite the decentralisation of the BMS, there will still be a minimal central, overarching 'mother brain'. It is there that the data from the individual cells are translated into system level information.

The development of smart cells is in line with the European Union's current ambition to take back control of the value chains behind batteries - for all applications, from electric transportation to stationary grid electricity storage and home batteries. "The EU does this by taking a clear position and focusing on a few aspects, such as sustainability, quality (long life, high performance) and safety," says Jeroen Büscher of VITO/EnergyVille. Our innovative solution can play an important role in all these aspects and thus form the backbone of an entire value chain. After all, better monitoring at cell level will result in a higher residual value for reuse, better performance and enhanced safety. "Eventually we will move towards a new economic model for batteries in which they last 15 to 20 years and in which recycling of modules or cells plays a much more important role." Today, in electric cars, most batteries are replaced after only nine years, although they often still have 80 per cent of their original capacity at pack level.

As such, smart cells can be a means for European battery production to differentiate itself from Asian producers and become more independent from the current big players. This is strategically very important, but it takes time. We will only be competitive in about four years, partly because of our focus on cost reduction, on longer and more optimal use and on more recycling. Thanks to this kind of smart innovation, eventually we may even become cheaper than Asia," says Büscher.